Ah well, a review of the PT-01 from Optics 1 … Back in the days it was ridiculous expensive, like most of the VR stuff. The pros are that it is very light and optimized for mobile use, i love that it comes with a belt clip and can be driven by a common battery. The cons are that it uses quite cheap plastic and that the case is just “stick together” and it will easily fall apart. Why they didn’t even use a screw or so to fix it properly together is beyond my understanding. 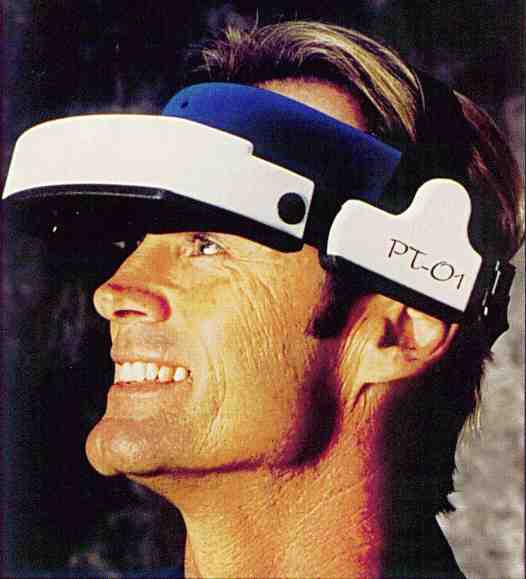 Another flaw is quite obvious – the sunshield which was obviously invented AFTER they started production as it looks like they cut off the visor of a baseball cap and clipped it to the device. They quite obviously realized that it’s not very immersive as they originally planned it. The sunshield is made of fabric and never stays in shape, it looks a bit like something you’d make yourself, not like it belongs to the device. Another terrible drawback is that it only accepts an A/V input. Yeah sure, it matches the device – no headtracker, no VGA input – a portable personal TV screen, w00t! I mean back in the days of VR who bought such stuff? People who were like “i wanna use it to watch TV” or Computer geeks like us? As a VR helmet it fails and for a TV replacement on the go its also not that handy as it lacks a receiver and see-through feature, so you definitely would not use it unless seated. No wonder it’s so rare, i couldn’t imagine anyone who’d really need or want it. More of a collectors piece. Also there was a stereoscopic version which had 2 AV input boxes. I must admit although i have seen this on several devices i never got how you use it “on the go”. Did they expect one to have 2 synchronized VCR on your belt? I always wondered why home devices came like this as i never found a way to get any use of having 2 AV signals.

OK so far for the PT-01. Collectors Value: 5 stars (For the rarity, brand and original price tag), usability 1 Star (add a second star if you dont have a TV set and intend to only watch videos on it anyways).