The Kimera game system from Immersive Technologies appeared at the 1995 IAAPA show with a solution to the VR arcade’s most vexing challenge: how to keep the helmets from being damaged or stolen without a full time attendant. Taking their cue from the Fakespace Boom, Kimera had a floating/pivoting display, to which the game player leaned into and then moved about. Indeed, you would mount your head to the display. At 525 lbs., Kimera came with a proprietary game, Pyramid Pilot, custom designed for Immersive by the software developer Algorithm. 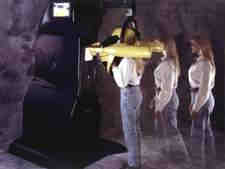