And All That Hype, Around the World 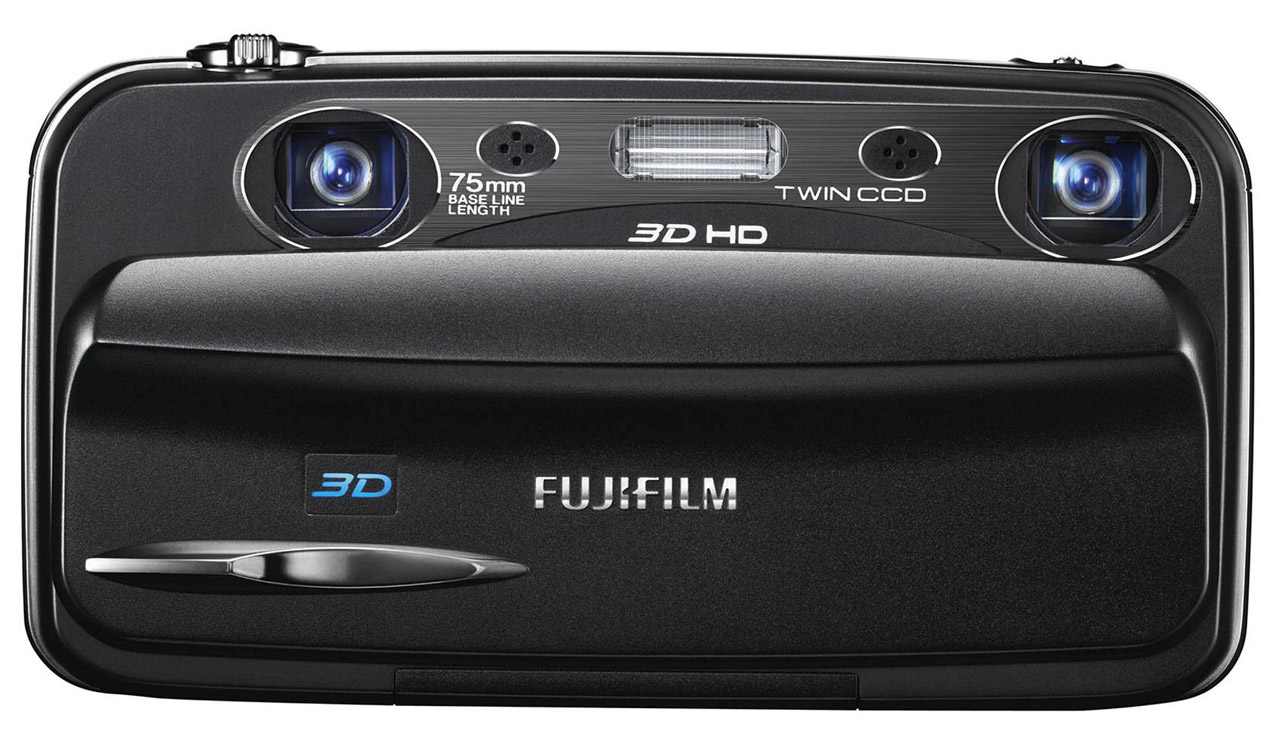 The Fuji W1 already hit shelves in japan last year, but it took a while untill you could see it everywhere else. Now i got my very own one and tested it a bit. OK it is not really directly related to Virtual Reality and also not really an artifact i used my good old 1995 iGlasses to watch the movies recorded with the camera.  regard it as a screensaver production kit for your old VR helmets while we wait eagerly for new hot VR stuff.

At first shame on the idiots on Akihabara news who had the honor to be among the first people who got a demo unit lent by Fuji themselves and wrote that devastating review. After reading their review (“Worst product ever, don’t buy!”) and having had some time to play with the camera myself it became clear that it’s safe to say whatever idiot wrote that article was a one-eyed kid with mental problems.

Okay, but let’s start with the first impressions. Just quickly prey open the box or shred it to tears to get to the precious piece and power it on. Even being one of the old guys you usually can’t impress with 3D i was a bit impressed when i held it in my hands and was greeted by a nice 3D Logo on that tiny screen. No glasses, no tricks – 3D hands free. But the limitations of that technology also become quite clear after a few seconds – the angle of view is extremely limited with this technology – just twist the camera a few degrees and the 3D effect is gone – you have to look straight 90 degree on the display or the parallax barrier simply won’t work.

Unlike the guy from akihabara news i neither became sick, got headache or dropped dead – my guess is that he just smoked old tires before writing his review.

The Cameras menu is quite tidy and also has a neat 3D effect. If you ever owned a digital camera you won’t have any problems. I am also that kind of guy who never reads manuals, but i was nearly instantly able to find what i was looking for. Why that guy from Akihabara news needed 3 hours to find the option to manually set the shutter is beyond my understanding. My guess is that he is from a remote indian tribe that never had contact with the civilization before he wrote that review. I am not even saying he should have read the manual – he would probably have thought it’s something edible anyways.

Well but let’s get to the core of the whole thing – taking pictures with the thing. There are 2D video and picture modes which are fairly uninteresting for a 3D camera. Not surprising is that Akihabara news mainly based their review result on the 2D pictures.

A camera without a viewfinder is not really that new since digital cameras have displays on their back and I’d say if you ever handled a digital camera without using the viewfinder it will not be a problem. That the Display displays the current picture in “live” 3D is a bit irritating in the first few minutes but you will quickly get used to it – what you see is what you get.

The picture quality is as expected – if you know a bit about digital photography you can guess how great the “10 megapixel” CCD are – as usual in this price class you have to set the camera to “fine” quality and downscale the pictures to around 5 megapixel to get rid of the typical “10 mp sensor noise”, so as with nearly all consumer cameras the 10 Megapixel are great for marketing but barely usable in their natural resolution. I guess we all expected that – but this one guy, you probably know who i mean.

Probably one of the cameras coolest features is the ability to manually set the parallax value, so you can set the “3D focus” even after you made the picture – this is really helpfull to adjust the 3D effect just as you like or need it.

The 3D pictures simply look great (unless you leave them in “normal” quality and 10 MP) and are really fun to watch. The camera display is of course too small to watch them on, but with a VR headset or converted to anaglyph they are really fun to watch and always give this “Wow” effect. The autofocus is working quite well and the count of “blurry crap” pictures is quite low if you compare to other cameras, you just have to live with the fact that it’s comparably slow.

One of the most important features – recording 3D movies- is unfortunately also the one which is quickly filling your SD card. A 1 Gigabyte SD card can not even hold 7 minutes of 3D video in 640×480. So if you plan on recording loads of movies you better grab one of these large 16 or even 32 GB SDHC cards (Which luckily became quite affordable). Videos can not be larger than 2 GB (Due to the card formatting), but that is around 14 minutes which should be more than sufficient for ” one scene”.

From today’s standards 640×480 as a maximum video resolution is rather poor, but still well enough for most hobbyist or home applications. After all the resolution of a DVD movie is just slightly higher and facing the lack of alternative consumer products i think it’s okay to go on without too much ranting.

The videos it records are surprisingly crisp and have a quite natural range of colours. The camera also operates quite well under low-light conditions. I was unfair enough to let it compete against a 1989 Toshiba SK-3D7K, a vintage VHS-C based camcorder – still today the only consumer 3D camcorder ever made. While the picture quality is quite comparable it quickly became apparent that the classic camcorder might be heavier and bulkier it is a more ergonomic approach. While it is quite obvious how to hold a classic camcorder it isn’t that trivial with the Fuji W1. I guess most people naturally tend to hold the W1 with both hands -which does not feel very natural for “camcorder” standards. AFter a while and countless “fingers on lens” videos you will somehow get used to it, but i would still prefer the good old one-handed camera holding style which is impractical to impossible with a digital camera of this shape size and weight.

The sound recorded on the movies is in stereo (Ironically the Toshiba SK-3D7K records sound in mono), but although it does not suffer from mechanic movement noise like the SK-3D7K it still sounds like “it could be improved”, the microphone setup is imho not really alligned optimal for stereo recordings, but i understand that if they placed them at the sides you’d not just cover the lenses with your fingers but also the microphones, so it was probably the best compromise.

The cameras autofocus speed is a bit slow, even if you set it to “fast” (The even slower setting is supposed to preserve battery power). If there is anything left to rant about it is probably the quite high weight of the camera, for its rather tiny size it is feeling rather “surprisingly massive”, but that they designed some key components like the lid over the USB port in metal sure is no bad decision regarding how often you have these fall off as they cheap plastic had worn out.

A must-have is the firmware update to 2.0 which fixes many issues and also finally adds 16:9 format (How they could forget that in previous versions is beyond my understanding). If you wanna show the pictures to friends without having the camera or a VR helmet in reach you can also vouch to have Fuji print the pictures in lenticular format (Like you know it from these cheap 3D postcards that were trendy in the 80s) or buy the matching Fuji V1 picture frame which is basically just a bloated-up version of the cameras display, unfortunately having the same limitations regarding angle of view, but if you can live with that the effect is stunning.

After all I’d rate the camera 4 of 5 stars and the perfect gift for the family’s VR geek.