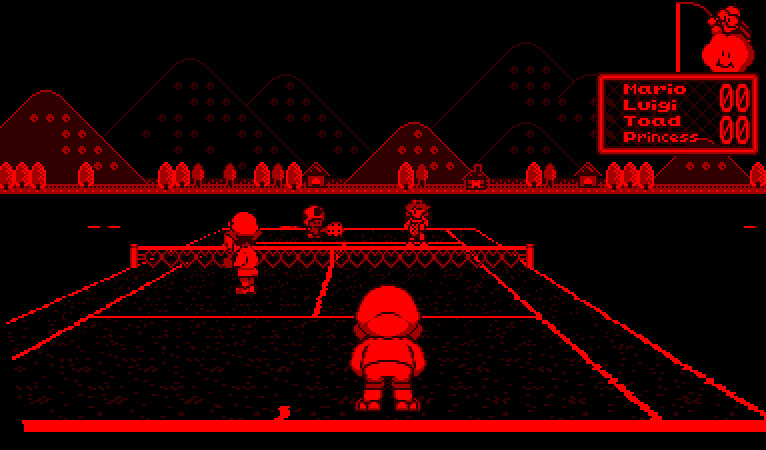 I don’t really agree with the Virtual Boy being VR’s “nail in the coffin”. I think it was just one of many crappy products. Maybe it could have saved the VR hype for a while if it was a big success, but as it is it’s just one of the many VR obscurities that simply didn’t sell.

Actually when you look back over a 15 year distance it is quite irritating that it was such a failure – after all Nintendo always had big successes with technically disappointing hardware – after the SNES, Nintendo constantly produced low tech consoles – not crap but low tech. With Super Nintendo they were technically “on par” (or at least close) with SEGA’s Genesis. With the original Game Boy they started the actual “wonder” – offering the console with the least attractive hardware at the best price and selling millions of them as the games are simply fun. This worked well with the game boy – although even for 1989 the tech was devastatingly poor, it sold like sliced bread. SEGA released the Game Gear one year later which had a much higher resolution full color screen, faster processor and better sound (If you can call the game boy’s beeping even sound) and sold worse. They pulled the same over and over with later consoles, I don’t even wanna go into detail.

Gaming In The Clinton Years

But back to the Virtual Boy – why didn’t the low tech trick work here? If you take a closer look at the Virtual boy and play a few of the games it suddenly becomes quite clear. The Virtual Boy was originally planned as a funky VR headset alike console. I think it originally even included a headtracker and a better display. What happened then will never be fully known. My guess is that some management guy looked at the cost and was like “OMG, thats like 10 times what we wanted to spend, cut this, cut that and take this cheap crap”. The original Virtual Boy design planned to use color screens, prolly the same displays as they were common in all low tech consumer VR helmets. Nintendo claimed that the color LCD caused users to see double – if you ever used a stereoscopic HMD you know that this is pretty much bullshit; who claims: “it has to be black and white or you see double?” Actually Black and Red in the case of the virtual boy. Fact is: back in the day, red LEDs were the cheapest available, so my guess is that Nintendo simply wanted it “cheap” as usual. The display itself – I haven’t even mentioned the display, but maybe its wrong to speak of a display at all. What would surprise most people is that although the Virtual boy is technically rather disappointing, the “display” is a remarkable piece of tech. No, not regarding resolution or picture quality – I am not a big fan of Black/Red 384 x 224 pixel displays, but if you ever opened up one you’d be like “WTF????”. Where you’d expect the display to be, you’d only find one line of exactly 224 tiny red LED’s – and a mirror. The trick here is that the mirror rotates very fast and thus projects the light from the LED into the eye – 50 revolutions per second resulting in a 50 Hz BlackRed display. Although the “display” is nothing you’d like to watch a movie on it is still a remarkable piece of tech, low tech that surprises – i thought only the Russians were known for that.

Another flaw was that it was originally planned as a headset – Nintendo obviously saw or played some VR arcade games and was like “w00t, the kids will love this”. In later development two things became obvious – the device was extremely heavy (It used 6 AA cells and the hardware was in the front, making it extremely heavy on the nose. The experience is comparable to the notorious Cybermaxx HMD – if you ever played a Cybermaxx you’ll know that users complained about their nose hurting after an hour of use, mine did hurt for a half day afterwards; I was already worried about permanent nasal damage… Kids and testers using the device concocted ridiculous ideas like playing it on the go or even while riding a bike which led to several small accidents; everyone knew game boy and expected Virtual Boy to be a “portable” device for sure, just from the name. After all the tripod stand looks ridiculous and people often laughed at it, but I bet none of them tried to wear this on their nose for an hour. So we got a crappy hardware and Nintendo – so why didn’t it lead to success? If you know the secret of Nintendo’s success it becomes quite obvious – the games. Game Boy became a hit mainly because it was affordable, cheap, very portable, batteries lasted quite long and it included easy fun games that were easy to understand. I think the main problem was that the typical Game Boy customer really knew the rough specs of the device and thus did not expect a full color 3D shooter with digitized speech and rendered cutscenes. But Virtual Boy expectations were different. The name, design and advertisement promised it – a Virtual reality console. Wow! We knew Virtual Reality from stunning multiplayer 360 degree virtual worlds, for example the first Virtuality Cs-1000 arcade machines first offered in 1991. Four years later we saw ridiculously expensive but impressive Home VR devices, most far over $1,000 – and now Nintendo brought out a VR headset for 150 bucks? They are known for their fun games, so lets get one. People knew that the monochrome graphics would not be too stunning, but of course everyone had some ideas about Virtual Reality – and that was the worst flaw: Everyone was disappointed.

While Nintendo demonstrated that they understood what stereoscopy is and how to properly produce 3D effects they failed to make proper use of it. It simply isn’t enough to take a tennis title and be like “Okay lets take an old game boy tennis title, make the front character pop out a bit and end of story.”. Other than”Red Alarm”, all titles rather appeared to be 2D Games modded by amateurs to have basic 3D effects. Titles themselves are also a big reason for the consoles failure – Nintendo released the console in North America with a whopping 4 (FOUR) released games. Of these “Mario Tennis” and “Galactic pinball” were both “unnecessary” titles. Mario Tennis was a rather average tennis game with extremely simple graphics. It was one of those games you’d really just play 1 or 2 times because of the funny stereoscopic effect, but as soon as that wears off you realize how terribly boring it is. Galactic Pinball: If you love pinball you can get some fun out of it although it is quite simple, the stereoscopic effect is weak, just unnecessary gimmickry which wears off fast. Telero Boxer – one of the more innovative titles with 3D effects and 1st person boxing, is fun in the beginning, but the game is ultra repetitive, it’s a pain to play it again once you knocked down 2 dozens of opponents. As already mentioned – Red Alarm was a rather promising title, not being my kind of game, but as a “Spaceship flies through obstacle course and shoots” kind of game it seemed to be the only one that sort of made use of Virtual Boy’s stereoscopic capabilities. When Nintendo officially buried the Virtual Boy there were just 14 games on the North American market. If you also observed the Japanese market you could perceive the reason for its failure. It’s called “Insmouse no Yakata” and it is the only attempt to make a 3D shooter on the Virtual Boy; I instantly thought they ported Maze wars from 1974. The hardware was simply not sufficient to even make a simple 3D game. In the end the hardware was just a crappy stereoscopic gameboy. If it had been at least halfway portable and didn’t eat batteries like a monkey eats bananas it might have stood a chance. But for a console you only play at home you for sure did not want a monoscopic, single player machine with a handfull of available games.

In the end it just goes to tell people “You get what you pay for”. People expected a Virtual Reality wonder and just got a 180 Dollar Gimmick without much real entertainment value. Why Nintendo released it is beyong my understanding – the ridiculous low number of titles and ridiculous short time on market underline that Nintendo didn’t really believe in it as well – from the beginning. My guess is that some of the higher manager was like “OMG, VR hype!!!! Lets just see how it develops, maybe it becomes a surprise hit.” Needless to say it didn’t. What is really the worst part in the story here is the sad role of Gunpei Yokoi. While he was the key figure in Nintendo’s whole success even before they got involved in Video games, he also was the producer/supervisor of many famous Nintendo titles that made the company write one success story after another. Donkey Kong, Mario Bros, Ice Climber and Metroid are just a few of the many beloved bestsellers Yokoi designed. The characters he invented like Mario and Luigi are still what most people identify Nintendo with and a commercial super success. Among his many brilliant creations is also the Game Boy, which was sold far over 100 million times world wide. But being grateful is not Nintendo’s strongest ability. Despite his merits, despite the remarkable effort to turn a color VR headset for 1000 Dollars into a 150 Dollar product and despite Nintendos failure to properly develop games for the system all blame was finally put on Yokoi. Nintendo had not been used to failure and it was probably over-reacted, but they finally asked the man who “built” Nintendo, the root of all success to resign. Around a year later Gunpei Yokoi got run over by a truck, he died on the scene.